A video series in 13 episodes

‘The basic problem of the Christians in this country (the US ) in the last eighty years or so, in regard to society and in regard to government, is that they have seen things in bits and pieces instead of totals.’

In the interests of making the series widely and easily available to everyone, I have put the series on YOUTUBE so it can be viewed for FREE. However, if you watch and appreciated the series and would like to support its production, it can be purchased through the means provided on this website. On purchasing you will have the possibility of downloading all files, along with receiving the files on an attractive credit card sized USB Flash Drive. See details for purchasing at end of this page.

If you're a Christian...

Do you feel unprepared to talk with others about the Bible…and how it relates to all of life?

Are you confused by the competing ideas and philosophies that surround you?

Do you feel ill-equipped to stand your ground against opposing viewpoints?

Have you been looking for clear, easily accessible ways to start removing confusion, and begin being informed and equipped?

Then this video series is for you, your home group, your church.

If you're not a Christian...

Have you ever wondered how life, the universe, and everything came to be
…by chance…or by design?

Have you ever questioned if the beauty and complexity in the world really came from a Big Bang, and other random, undirected processes, as we are told on every hand?

Have you wondered if there’s meaning to life…and if there is, why…and if not, what then?

Have you wondered if right and wrong exist…and why…and if so, how we can know one from the other…and who decides?

Have you ever wondered what a human being is…and, whatever they are, whether they are good or bad?

Have you wondered if evil exists, and if you think it does, are you bothered by it?

This video series could provide answers to your questions.

There are many books that address the question of worldviews, but few videos. Some books are better, some worse, some accessible, and some daunting to behold. But very few, even of the better ones, illustrate the concepts involved with anything more than a chart or two, outlining key ideas and points of difference by way of comparison.

This video series is different. It uses easily remembered animated images to illustrate the concepts in graphic terms. It includes wherever possible, pictures, videos, animation, and text, to illustrate the spoken word.

Moving from identifying a clear shift of thinking about morality in recent times, and suggesting that worldview thinking helps in understanding this, it progresses through describing what a worldview is, how we got the one we have, and the fact the Bible presents us with a worldview. It then moves to a very accessible investigation of the Biblical and Humanistic worldviews, and a final call to commitment and action. Like bricks in a wall, each episode builds on those before until the overall theme is addressed.

How did it come to be?

Many years ago, Dr Francis Schaeffer introduced me to the concept of worldviews as a way of getting a handle on living as a Christian in a secular world. I was involved with teaching church young people, and began developing ideas and images as ways to help them understand Christianity and the world they lived in.

With the advent of reasonable computing power, I decided I should digitise the images, which till then had been on overhead transparencies, a technology from the dark ages before computers. I was then faced with what to do with them in this new format. I thought of publishing them in a book and toyed with that idea for a time, being encouraged by Christian philosopher, Dr Ronald Nash to do so. Then thought of using them in a PowerPoint presentation which I could market to churches. But I quickly switched my thinking to video as a method of delivery. That way, the illustrations and concepts could be animated, and communicated without me being present…and go places I never would.

However…there was a huge problem with this. I had never held a video camera, and knew nothing of film-making, let alone knew of, or had, all the tools necessarily to carry out such an enormous project. Further, as a ‘nobody’ with minimal funds, no one would be queuing to offer for no cost, thousands of hours of production time, and the use of the thousands of dollars worth of specialist programs and equipment necessary to pull it off. If it was ever to see the light of day, I would have to do it myself.

It took over eight years of acquiring gear and hands-on learning of film-making skills, guided initially by the profusely and freely offered advice of a fantastic but now defunct amateur video web group, before I was satisfied I was equipped to move on with the project. And then another six or so years passed while I edited scripts, filmed the episodes, and put it together in post production. It’s been a labour of love and a learning curve like no other I’ve experienced, into which I’ve sunk my life over several decades.

At times I wondered if I would live to see it finished.

But it is finished.

My prayer is that it will edify those who follow Jesus. That it will inform and challenge all who watch it, Christian or not. That they will, as a result, either come to know Christ, if they don’t already, or be more effective and knowledgeable witnesses to the Glory of God…in a world at odds with Him, bent on going its own defiant way without reference to the One who made it…

While the video series is FREE on YOUTUBE, two options are available if you choose to purchase so as to support production.

At the bottom of the ‘Purchase Confirmation’ page there is a ‘Shipping Address’ form that needs to be filled in by those who purchased the Flash Drive option. Fill in the form and hit the ‘send’ button. The Flash Drive will be mailed to the address you give.

After purchasing, you will be sent a ‘Purchase Receipt’ email. This email will contain links to the ‘Worldviews in Conflict’ files for you to download.

The download includes 13 separate files. It is suggested that a new folder is created on your device…perhaps named ‘Worldviews in Conflict’. Download each separate file into this folder. The largest of the 13 files is 202MB, and the total download size is 1.7GB, so make sure you have enough space in your storage to hold them.

Each download link is quite long due to the security system the store uses…and depending on what device you use, can appear initially to run into each other. https:// starts each different download link.

When purchasing, you will also be given the opportunity to create an account if you so desire. Having an account will give you access, at any time, to your purchase details and the download files you have bought. Downloads from the ‘Purchase Receipt’ email should be made within 72 hours. 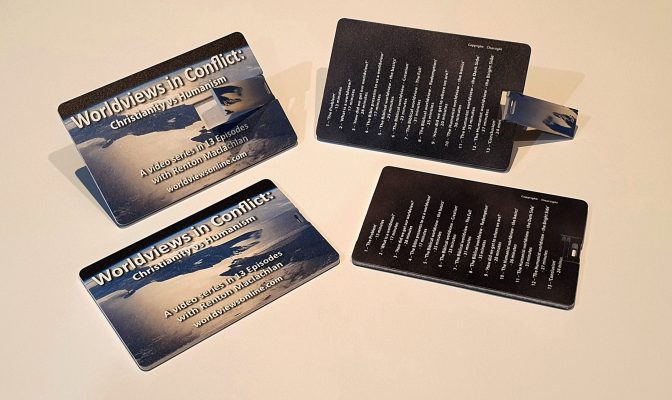 At the ‘Resources’ menu link in the header, you can find suggestions on how the series could be used, along with a number of articles illustrating applications of the Biblical worldview to various subject areas. You may find the latter helpful in developing your own application of the material presented in the video series.

Study questions for each episode may eventually be produced. If so, these will be available via download from this website.

As time goes by I may add further articles or other media relating to worldviews. I will advise all who purchase the series, of any such additions or developments to the site which may be of interest.

Any information gathered, such as email addresses, will not be shared with anyone, and will be used sparingly for the above purposes only.